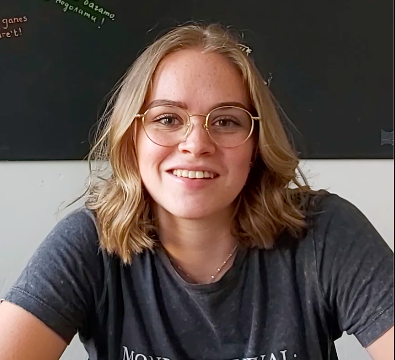 My name is Wiebke. I'm 19 years old and I'm from Thüringen in Germany.

I also participated in the Brave New You project and what did I learn today? I learned many different things. But one thing that I mainly learned is about stereotypes against other people or towards other people - I'm not saying that they need to be in the world, because most of the time, they're not even true. That's also one of the most interesting moments during the Youth Exchange; when we recognized that we don't need to hold stereotypes towards each other. And it's also really important for me to spread these thoughts in the world, that stereotypes don't need to exist and that we should live in a world without stereotypes or only with good stereotypes. And it's also something I got from the youth exchange: to think less about stereotypes and also, acknowledge what I have and where I live, and to be happy that I can participate in such projects.

I'm really thankful for that.