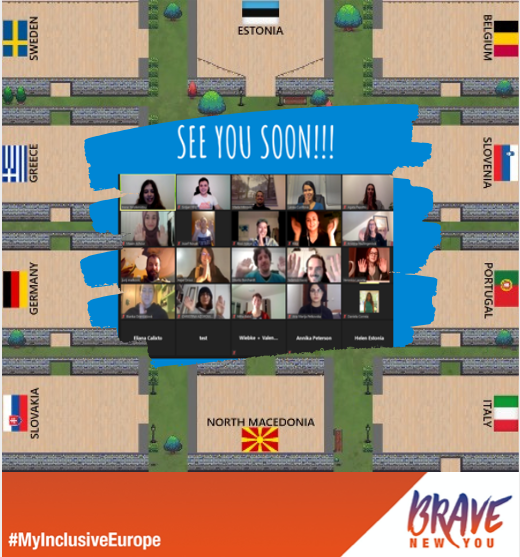 A crucial part of the BNY Reloaded Project was the Youth Exchange (YE) Activity which took place from 26th of November to 11th of December 2020.

The original proposed idea was that the YE will gather 50 people from the 10 partner countries (5 participants per country).  However, due to the consequences of the COVID-19 Pandemic we had to adapt the exchange itself to the current situation and move the YE into the online sphere.

Using innovative online facilitation methods, the trainers, in collaboration with the organizer and with the support of the YEU Secretariat and PET Coordinators developed an exchange program focused on sharing the experiences of the participants. The aim of the YE was to provide space for each of the local teams developed in previous activities to get together, share their identified hateful narratives, and work together on building each other’s competences on how to tackle them, and share practices on how to create alternative narratives.

For this reason, special attention was given to Gamification and to interactive tools such as Gather.town and other various types of visual presentations. More specifically, in Gather.Town participants have their own player and can walk and interact with other participants and surrounding objects. Besides, learning more about the stories and the activities of the local teams was the ultimate objective, so let’s get a glimpse of what the local teams presented during the YE:

The local group of ActionAid International Italia Onlus (AAIT) presented their digital campaign fighting hatred and violence against women whereas the local group of the Association for Development, education and Labour (A.D.E.L) tackled the prejudices towards the Roma Community in Slovakia. CGE Erfurt e.V., reaching out to the local community in Thüringen region in Germany, presented also their activities. The local group of United Societies of Balkans (U.S.B.) which consists of teenagers living in the outskirts of Thessaloniki touched upon the issue of hate speech against LGBT+ People in Greece. The local group of the Center for Intercultural Dialogue (CID) discussed the issues of school segregation as well as the problem of environmental pollution in North Macedonia.  The members of the Youth center BIT local group in Slovenia presented the issues that they are facing in their area, Bela Krajina and identified hate speech as the biggest problem of their High School. Open Youth Centre of Sauga (Sauga ANK) aimed to include in their local group young people from 4 different areas of Tori municipality and during the YE they showed a video introducing them and their work. Stiftelsen Fryshuset in Sweden has chosen to work with a group of males and females between the ages of 15-20 years, from a disadvantaged area called Vivalla. The local group that the Organisation MOJU – Associação Movimento Juvenil em Olhão is working with, talked about their activities and the hate speech narratives they are focusing on, concerning mainly racial discrimination and gender expression. Finally, YEU’S local actions will be developed through RainbowHouse Brussels (RBH), whose main aim is to fight for LGBTQIA+ rights. They presented the challenges faced and the solutions needed. Finally, they talked about a Toolbox developed, called Challenging hate speech against LGBTIQ+: A Counternarrative for Young People.